Denver Chalk Art Festival, 2014
Back
Next

This piece is a personal piece. The Denver Chalk Art Festival is a great place for me to have a chance to explore the creative boundaries of my art. While we are sponsored graciously by Sola Salons at this event, they have always been very good at letting us loose artistically. Most events have a theme and we enjoy working with clients in coming up with a design that coordinates with that theme. But because this event is open and because we have three days to work on it, it is at the Denver Chalk Art Festival where I try out my craziest ideas.

I came up with the music box piece a long time ago. It actually had been sitting in sketch form for about three years, waiting for just the right opportunity. There were several new challenges with this piece that I had never attempted on a previous chalk art piece. The first is that the piece is extremely geometric. Creating irregular broken holes in the earth in 3D is pretty easy. For the most part you can kind of fudge it, after all, it’s organic, right? But when you have something that is architecturally geometric, there’s no hiding perspective errors. You have to make sure you have the vanishing point, measuring point, shadow vanishing point, all in the precise location based upon standing position, or else the whole thing gets distorted.

That was my first challenge. The second was the figures on top. I wanted to create porcelain figures, fairly realistically, in the illusion, as if they are standing upright. This is not easy. You can’t just draw a figure and then flair it in perspective. I mean, you could, I suppose, but it wouldn’t look exactly correct. I constructed the figure out of boxes first, boxes in proper perspective based upon vanishing and viewing points. Then WITHIN the boxes, I drew the figures, distorting them as the boxes distorted toward the vanishing point. I had to remember that the figures were only going to appear to be three feet high, that meant having to draw the figures as if the viewer was looking DOWN at them. I had to do all of this, WHILE remembering to render the figures as if they were porcelain. 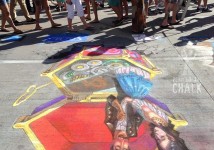 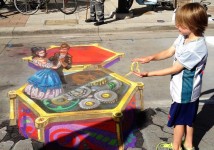 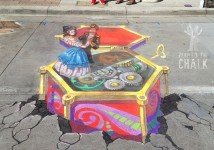 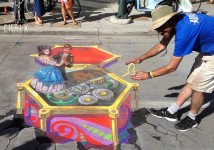